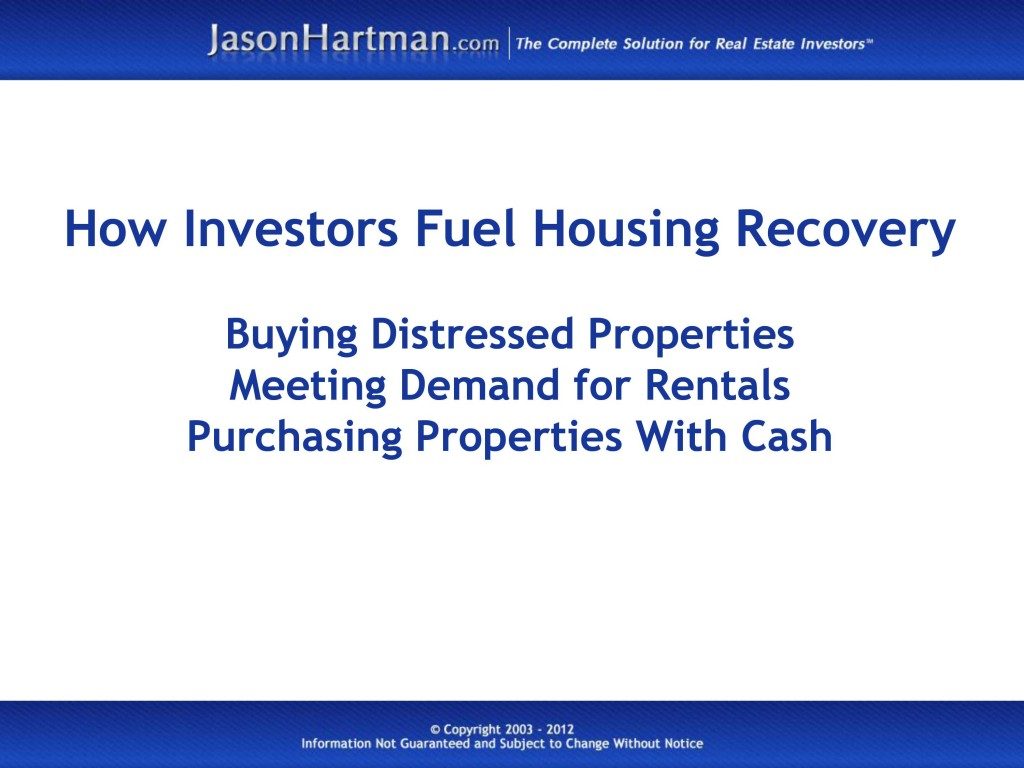 If the US housing market is on the rebound, thank a real estate investor. That’s what some leading economists and real estate experts are saying in response to the news that in 2011 investment home sales increased by 64.5 percent, with 1.23 million home purchases closed by investors. With rental rates rising and housing prices remaining relatively low, rental property investors using Jason Hartman’s strategies not only generate a stable income stream but also contribute to the recovery of the housing market, which in turn fuels economic recovery.

Although one key indicator of the housing comeback is the number of new home starts and building permits issued, purchases of existing homes on the market, generally foreclosures, also contribute to the profile of a gradually expanding housing market – a market that favors investors over typical homeowner purchasers. Several factors combine to cause these conditions.

Some real estate specialists point out that the housing market collapse of 2008 and beyond, which brought record numbers of foreclosed and distressed properties to market, has peaked and is in rapid decline. Yet viable foreclosures are still hitting the market, many of them because the record backlogs of foreclosure and bankruptcy actions are only now reaching the courts. As those “deferred” foreclosures are settled, a new wave of distressed properties is becoming available to investors, many for very low prices.

The same housing collapse that forced many homeowners to give up their houses also contributes to a flourishing rental market that keeps homes occupied, contributing to a vacancy rate in early 2012 of only 4.7%. Among those renting instead of buying a home are many of those former homeowners, who aren’t financially able to make another purchase, as well as many other households without the stability to qualify for financing.

Since rentals are in demand, rents are also rising. A recent CNN article pointed out that, during the first three months of 2012, rental rates rose by 5.6% compared to the same period in 2011. At the same time, home purchase prices remain low – so low that many investors are able to buy distressed properties for cash, which gives them an advantage over a purchaser who simply wants to buy a home to live in. Not only that, investors who do seek financing for their investment purchases often buy multiple properties – a strategy Jason Hartman advises as a way to diversify holdings and protect investments.

According to some real estate specialists, it may be too early to tell whether the new activity in the housing market contributes to a lasting recovery. For now, though, a number of key factors — rental prices, rental demand, low housing prices and favorable financing rates — combine to make the current real estate market not just a profitable one for new investors, but also a welcome boost to the economy as a whole.