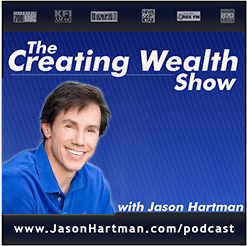 Advertising on the Creating Wealth Podcast will provide you with 13 episodes of 30 second(ish) spots voiced by Jason Hartman.  Each engaging ad will be composed via talking points that have been agreed upon pre-production.

The show has a global audience with listeners in 164 countries. Visit our podcast page or search “Jason Hartman” at the iTunes store for details. The show has been tracked with over 5,000,000 downloads, and are regularly ranked #6 on iTunes charts.

Offering a promotional opportunity to listeners in 164 countries worldwide. In addition to the strong following of listeners, Jason’s ongoing list of big name guests continue to draw in nationwide listeners by the thousands.

Notable guests include:
Steve Forbes – #302 – The editor in chief of Forbes Media

Brian Tracy – Jason Hartman University Podcast – The most listened to audio author on personal and business development and success in the world today.

Jack Canfield – #310 – Jack Canfield is an American author, and motivational speaker. He is the co-author of the Chicken Soup for the Soul series, which has more than 250 titles and 500 million copies in print in over 40 languages.

Jim Rogers – #307 – An American businessman, investor and author. Rogers is the Chairman of Rogers Holdings and Beeland Interests, Inc. He was the co-founder of the Quantum Fund and creator of the Rogers International Commodities Index (RICI).

Ellen Brown – #72 – Economic writer and author of Web of Debt

Bruce Norris – #11 – An active investor, hard money lender, and real estate educator with over 30 years experience.  Currently serves on the Executive Board for the Real Estate Research Council of Southern California

Dan Millman – #400 – The author of, “Way of the Peaceful Warrior: A Book That Changes Lives” and “The Creative Compass: Writing Your Way from Inspiration to Publication.” He’s also the former director of gymnastics at Stanford University and a former world champion athlete, martial arts instructor, and college professor.