Jason says: The safest investment is a DIRECT INVESTMENT! 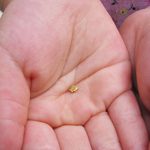 They’re our bizarre-o twins in the world of investing. When our market is up, theirs is down. We trade securities used to assign a value to companies, industries and commodities. They trade a useless piece of rock that people dig up.

We don’t understand one another, so we eye each other warily. Sure, some of us may own a little gold, but we only hold it as a hedge — or as jewelry. The gold bugs may hold some stock, but their hearts aren’t in it. And they can’t wear it.

They’d rather be standing at the corner of Wall and Broad streets with their sandwich boards shouting, “The end is nigh.” They appreciate stockpiling.

Yet when things get tough, the gold bugs always seem to have the last laugh.

GLD) has dipped a little from the rarefied air around $1,000 an ounce. But it’s still trading near where it was a year ago. Holding steady puts your asset class in elite company these days.

And have you ever noticed that, even though there have been some good con artists, there’s never been a brazen Ponzi scheme in the world of gold investing? Sure, miners have often promised and not delivered. But when it comes to old-fashioned fraud, gold is hard to trick. Either you have it or you don’t.

That’s why the government’s arrest of David Copeland Reed caught a lot of the gold world’s attention Tuesday. Reed was the gold world’s Bernie Madoff. No, he didn’t make off with $50 billion, and he surely didn’t turn himself in, but Reed in just a few months allegedly bilked investors out of $12.8 million using nothing more than a computer, some fast talking and, oh yes, the glitter of gold.

Reed, charged with three counts of wire fraud and some money-laundering violations, basically set up an Internet bank called OSGold in the spring of 2001. His hook wasn’t that he had Federal Deposit Insurance Corp. backing; it was gold bullion. Not just any gold bullion, but a lot of it — stored in an offshore vault.

His deposit-taking method wasn’t some kind of fancy encrypted, password-protected computer affair. No, he asked customers to wire him their money.

The money began to really flow in May 2001, when he offered investors what prosecutors say was a fund promising a 30% compounded, three-month return and a 45% annual return. The nice thing about this investment was that Reed promised the principal was fully guaranteed.

Customers knew this to be true because they could look up their accounts on Reed’s Web site. Those blazing computer screens consistently gave his investors the good news, prosecutors say. Huge gains were made in the “foreign exchange markets.”
Twelve months and close to 66,000 accounts later, Reed disappeared.

Holy Harry Markopoulos, that was easy.

Everyone knows that if something is on the Internet it must be true. But in this case, it wasn’t. One of the bank’s customers tried to make a withdrawal of $10 million in 2002 and came up empty. Insufficient funds.

Prosecutors say Reed made off with his clients’ cash, which he used to buy tickets to Cancun, Mexico. There he bought cars and launched business ventures such as a nightclub, a gym and a shopping mall. Foreign exchange, indeed.

When the jig was up in the summer of 2002, Reed and his family stuffed a bunch of cash in duffel bags and their clothes and boarded a plane for Cancun. Prosecutors say that to buy some time he told investors that there were “technical problems” at the bank — which was technically true: The money was being crammed into luggage.

Reed came back to the states and was arrested in Columbia, S.C., earlier this month. He faces up to 20 years in prison and fines if convicted.
Reed’s is hardly the worst of the frauds that have come to light in recent months. We’re all aware of the Robert Allen Stanford’s arrest last week for an alleged $8 billion fraud, and, of course, of Bernie Madoff’s high-profile case.

Two major fraud cases were announced Wednesday. The Commodity Futures Trading Commission charged two traders with a $553 million fraud that came to light in an audit. Another suspected Ponzi-style scam artist, James Nicholson, was charged with securities fraud and bank fraud for pilfering what could be more than $100 million of his clients’ assets.

Reed is a speck in the gold mine of fraud triggered by the disruption in the marketplace. It’s amazing his crude methods were so successful. Forty-five percent returns? Not even Madoff claimed such outrageous results.

The gold bugs finally have their villain. His claims turned out to be as elusive as the Treasure of the Sierra Madre.